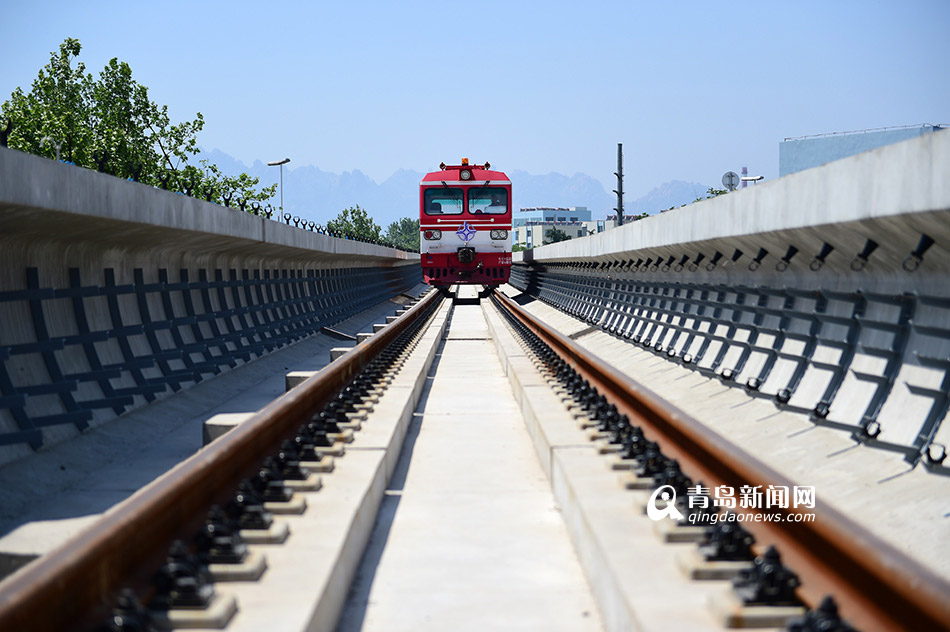 The 25.62 km elevated section of the first phase of Qingdao Metro Line 13 was successfully opened today, which laid the foundation for the completion of the entire line in 2018. On the morning of the 18th, a reporter from Qingdao News Network boarded the construction railcar of Line 13 and felt the convenience of the West Coast rail transit in advance.

On the morning of the same day, the reporter came to Century Avenue Station on Line 13 and found that the station had been capped and workers were undergoing internal renovation. Subsequently, the reporter followed the construction crew to board the rail car and set off from Century Avenue Station to Shuangzhu Road Station at a speed of 30 kilometers per hour. From the window of the railcar, Zhushan Forest Park in the distance is faintly visible, with tall buildings standing beside the track. There was no time for traffic jams and waiting for the traffic lights. The rail car headed north all the way and arrived at Shuangzhu Road Station 5 minutes later.

It is understood that the Qingdao Metro Line 13 will be able to run at a speed of 60 kilometers per hour when it is opened to traffic. By then, from Jialingjiang Road to Dongjiakou Railway Station, it will take only one hour to complete the journey of nearly 70 kilometers, and Metro Line 13 Interchange with Line 1, Line 6 and Line 12.

Qingdao Metro Line 13 is currently the largest investment in infrastructure projects in the West Coast New District. The whole line runs from northeast to southwest. It starts at Jialingjiang Road Station in Qingdao Economic and Technological Development Zone and ends at Dongjiakou Railway Station. The main line is about 70 kilometers in length and has 23 stations (9 underground stations and 14 elevated stations). ), The average station distance is 3.16 kilometers. After the Qingdao Metro Line 13 is completed and opened to traffic, it will become the backbone and express line of the rail transit that runs through the Qingdao West Coast New District, and will realize organic connection with the city's rail transit network.